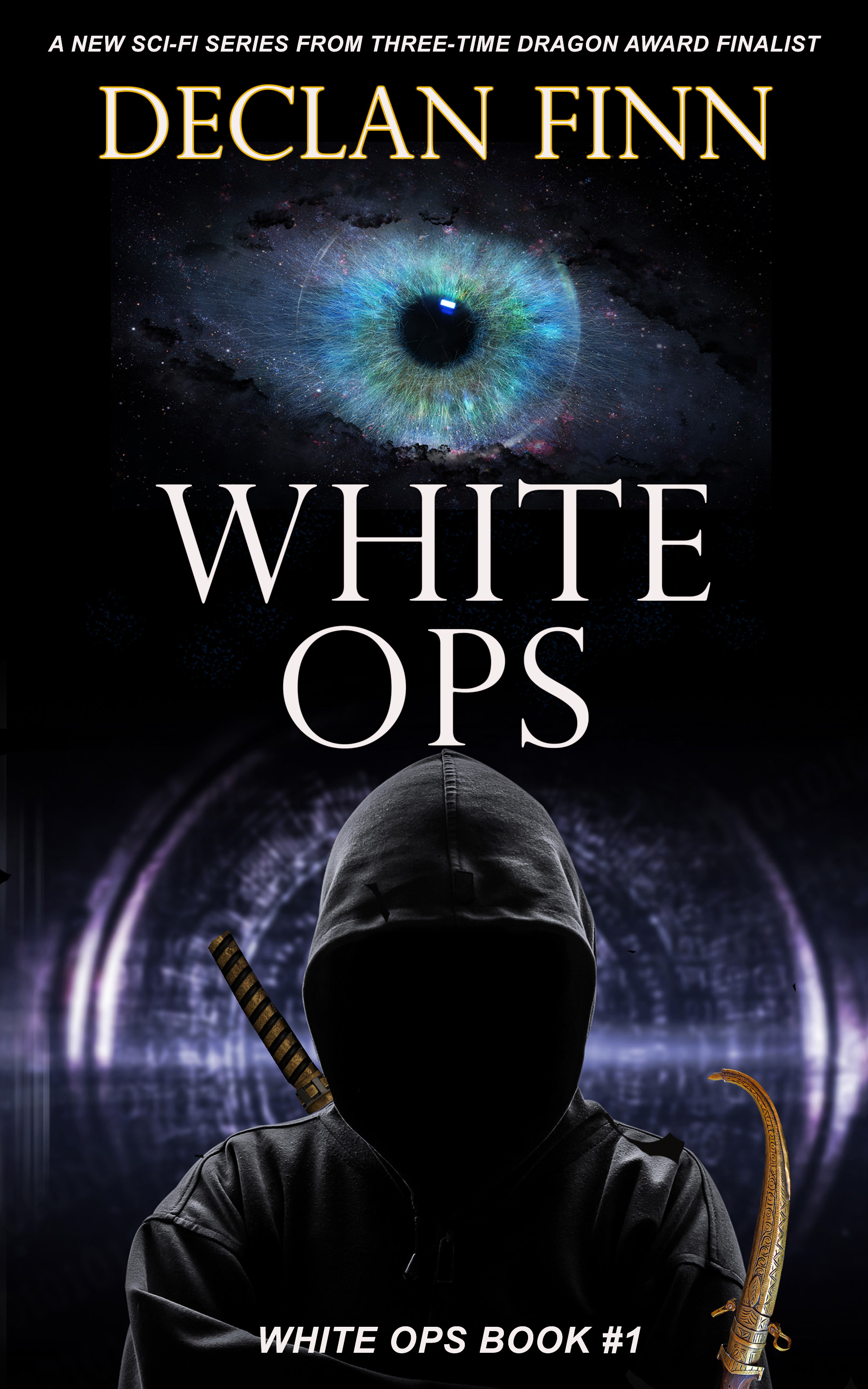 The Pharmakoi rampaged across dozens of star systems, taking on the toughest races in the Galaxy in their campaign of conquest. But they are only the beginning.

Sean Patrick Ryan sees that another race is behind the Pharmakoi expansion ; a race that wants to test our galaxy for weakness, and who needs to be eliminated from within. To fight the enemy in the shadows, Sean will put together a strike team to light up the darkness— with nukes if necessary.

They will get the job done at any cost.

They will be White Ops.

Sean Patrick Ryan’s White Ops team has taken on impossible odds and walked away unscathed. But when Earth President Douglas Wills turns Earth into a prison camp, they will fight an entire planet to save their loved ones.

Along the way, they must unite hundreds of alien races against the looming threat from another galaxy and recruit allies that can only be reached through hyperspace filled with hostile space jihadis.

War may be Hell, but politics may kill them first.

Sean Patrick Ryan’s White Ops team has survived two wars, pirates, a cannibalistic alien horde from another galaxy, space jihadis, and political maneuvering. Their boss thinks they deserve a break and sends them to the “happiest place in the galaxy.”

Luckily for Sean, terrorists take over the amusement planet before he can lose his mind.

To stop the terrorists, White Ops will have to battle a weaponized planet, including cloned dinosaurs, giant sharks, animatronic amusements and a doomsday device that will destroy the planet.

And when the deadliest assassin alive joins the fray, whose side will he be on?

People who aren’t exactly as they seem.

Familiar places transformed into sinister voids of darkness and despair.

Stories of the paranormal and science fiction, both macabre and mystifying, that will have you hesitate in fear and awe before you step out… Into the Night.

“Giammanco puts forth a strong debut collection – as varied as it is imaginative – that will intrigue, mystify, surprise, and frighten her readers. Once you crack open the pages, there is no escape.” – Shawn Burgess, author of the bestselling book, The Tear Collector.

Millions of years in the future, humanity has been driven out of the Milky Way and now calls the Andromeda Galaxy home. Lost in their murky past are the tales of great knights that held the line against the invasion of a dark force until the rest of humanity could escape their doom. The last and greatest of these knights was Galen Underwood.

Long after that heroic stand, a mercenary by the name of Galen Dwyn has been hired to rescue a kidnapped princess. Enticed by a healthy down payment and a chance to settle an old score, Galen accepts the job, only to find out it’s a lot more than he bargained for.

Soon Galen finds himself weaving and dodging through a web of political intrigue as the very forces that chase him have set in motion plans that will throw the galactic alliance into civil war.

To his surprise, he also finds that the rescued princess might not be quite the spoiled brat he rescued from the clutches of her keeper.

Accompanied by the princess, his former mentor, and a snarky AI, Galen sets out to find a way to outsmart entire kingdoms, keep the princess alive, and avert the deaths of millions.

Of course, he’ll also learn the reasons behind his namesake’s chosen path, as he realizes that the only way to win is Galen’s Way.

Dragon Award finalist Richard Paolinelli takes us on a grand adventure in this Space Opera offering set in the first book of the Starquest Saga. Set in the 4th age of Dragon Award winner John C. Wright’s Starquest universe that will feature several books by Paolinelli, Wright, and other authors in the months and years to come.

“As we crossed the threshold the temperature difference between the air outside and the building we were entering was slight. But for some reason I felt a harsh, icy shiver travel the length of my spine.”

Lost on a dark desert highway, Pete Childress just wanted a good night’s sleep. Now he must find a way back out of a hotel with no exits and where tomorrow never comes. Worse yet, the fate of a ruined world, and the future of all humanity, hangs in the balance.

Working with the lovely, yet mysterious, Hotel Desk Clerk, Liz, and under the ever-watchful eyes of the hotel manager, Pete explores the many mysteries that lay within the walls of The Infinity seeking the answer to the mystery and the way back to the outside world.

A collection of stories by nine authors based on The Infinity Hotel from the 2017 Dragon Award Finalist for Best Sci-Fi Novel, Escaping Infinity.

These eight stories explore some of the other “guests” collected by The Infinity, as well as others who encountered the mysterious hotel but did not enter. Some of history’s most memorable fictional characters – including Sherlock Holmes and the answer to that one case Dr. Watson wrote about but never published, the true fate of Ichabod Crane and what really inspired a certain storyteller of the Arabian Nights – who will all cross paths with The Infinity.

This second book also helps set the stage for the next book in the series, Expanding Infinity, due out in 2022 and reveals one terrifying mystery regarding our universe.

After all, escaping The Infinity was just the beginning of the adventure!

Reaching out with his right hand he snapped the curtain away from the pane…and came face to face with a hell Dante could never have imagined.

“Where am I?” he asked, trying to comprehend what he was seeing.

“You’re still in San Francisco, Dr. Collins, just one hundred and two years later. A lot has happened since you last saw the city.”

“You have a talent for understatement.”

Steve Collins was just trying to save the world from the next killer asteroid. He wound up killing over seven billion people instead. A century later, he’s now the only hope to save the surviving one million humans left alive in the entire universe. 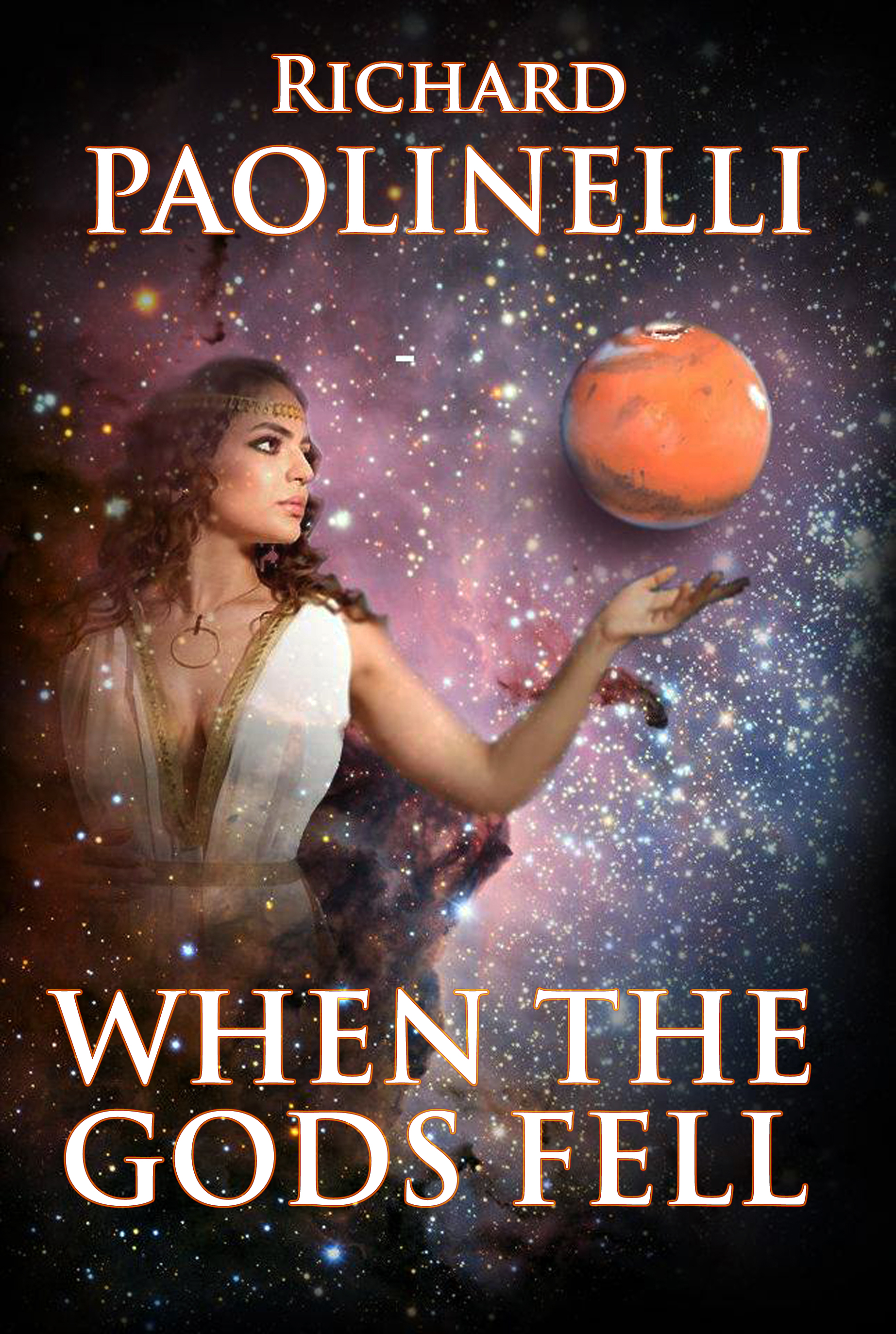 WHEN THE GODS FELL

“I have waited for this day for many millions of your years,” the woman continued. “I feared that you would not come in time.”

“Who are you?” Matsuo asked, the first of the two men to find his voice.

“My name is Oracle Veritas,” she replied, “I am of the House of Delphi in the Caste Olympia. I have been tasked to tell you our story. There is much to tell and precious little time to tell it.”

“Because a dark force is rising up once again,” the strange woman replied. “And I fear that this time it will destroy us once and for all.”

– When The Gods Fell

The first mission to Mars discovers our origin stories were wrong. Earth’s gods, led by Zeus, Odin, Ra, and Lucifer, waged a terrible war on the Red Planet millions of years ago; but the final battle still looms, and Earth will be the final battlefield.

By Richard Paolinelli and Gibson Buffa

Earth’s Past Is Under Attack!

In the far distant future, with the galaxy locked in an area of dark space where electronics will not work, Little John Singapore sits in a prison cell on Pluto awaiting execution. Singapore is the First Mate of the pirate ship, the Timeless. As he awaits his fate he agrees to tell a young author one story each day about his ship and his Captain, Rock Congo.

Singapore tells how the Governor of the Sol system Garabaldi enlisted the ship and her crew to pursue Duchess Moran. Moran is an infamous interstellar thief tired of her plans being interfered with by the Earth-led Alliance. She has stolen the Amulet of Geraint, allowing her to travel through time at will. Her target is ancient Greece, where she plans to prevent democracy from ever taking hold by stopping King Leonidas from reaching the famed Battle of Thermopylae. By changing Earth’s past she hopes to prevent the Alliance from ever forming.

The Timeless, a ship that can sail through space, air and water with equal ease, is the only ship capable of time travel, and Earth’s only hope to save its past, present and future. Despite being crewed by pirates, Garabaldi sends them through time in pursuit of Moran.

When the Timeless arrives in ancient Sparta, the find Moran has already been there and has kidnapped Leonidas and his Queen. Now they have just a matter of days to find her and the King to keep his appointment with King Xerxes of Persia and preserve Earth’s history.

The first book of the Timeless series, a middle grade/YA science fiction/steampunk hybrid, is sure to be a hit with readers of all ages. As well as fans of historical fiction as the Timeless and her crew will be very busy in Earth’s storied past in future books in the series. 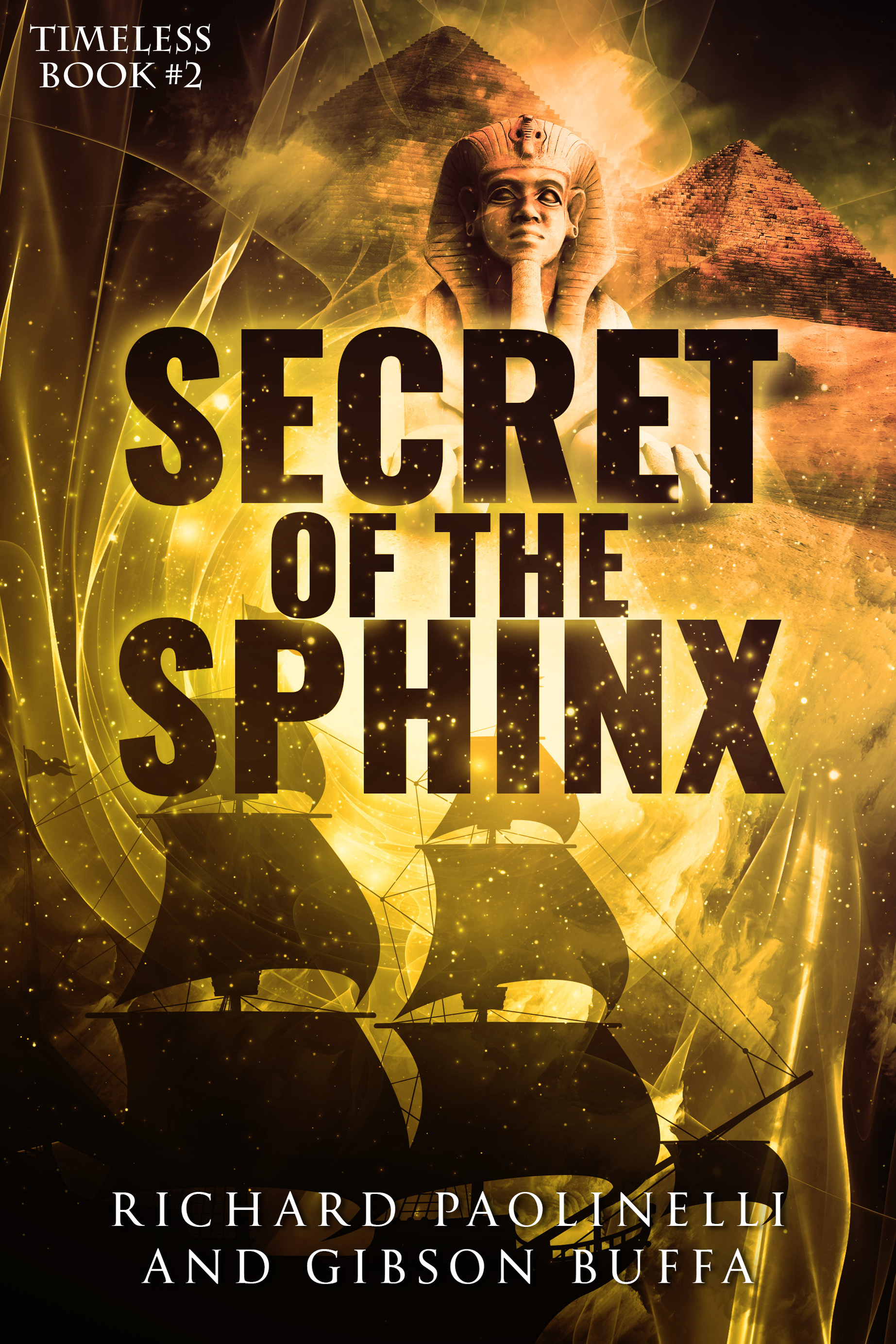 SECRET OF THE SPHINX (Timeless #2)

By Richard Paolinelli and Gibson Buffa

Interstellar thief Duchess Moran continues her assault on Earth’s history. This time she travels back to ancient Egypt in search of a deadly secret: A gem that can raise an army of the undead to wipe out every living creature on the face of the Earth.

But to find the stone, she must first locate a scroll hidden away deep within the Sphinx.Captain Rock Congo, his First Mate Little John Singapore and the crew of the Timeless remain hot on her trail through time and space. From the Library at Alexandria during Caesar’s siege of the city to the construction of the Sphinx and even further back as the legendary architect Imhotep tries to steer his Pharoah, Djoser, from disaster.

When Moran arrives looking to gain possession of the Eye of Anubis all of Egypt, and the entire planet will find itself on the brink of annihilation!

The second book of the six-book series is sure to please any reader from age 10 to 100.