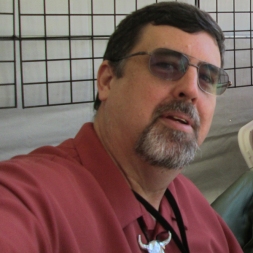 Richard began his writing journey as a freelance writer in 1984 and gained his first fiction credit serving as the lead writer for the first two issues of the Elite Comics sci-fi/fantasy series, Seadragon. In 2010, Richard retired as a sportswriter and returned to his fiction writing roots. Since then he has written several award-winning novels, two non-fiction sports books, and has appeared in several anthologies including eight of the 11-book Tuscany Bay Books’ Planetary Anthology Series and five Sherlock Holmes collections. He also writes a weekly Star Trek fan fiction series, The Calling, on his website, www.scifiscribe.com.

He has multiple novels planned for release this year including, Galen’s Way, a space opera set in award-winning author John C. Wright’s Starquest Universe. Galen’s Way is the first of eight planned novels connected to Starquest that Richard will be writing and releasing over the next two years.

He also occasionally fills in as a guest co-host on The Writer’s Block whenever Jim Christina’s horse runs off and leaves him stranded in the middle of the desert.