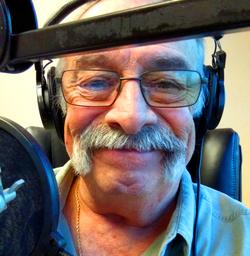 Jim Christina was born into an Air Force Family in 1949. Living all over the world before finally landing in Del Mar, California. A musician, historian, writer, poet, playwright…all things describing Jim Christina. A graduate of San Dieguito High School in Encinitas, Ca, and Old Reliable University in Washington State, Jim spent almost ten years in the US Army before joining his father in the family’s paint business.

While managing a territory in Washington and Oregon, Jim began composing music and writing the lyrics. Forming a band in Tacoma, Washington, “Sundown”, Jim’s music and the melody of Sundown played up and down the state before Jim moved to California.

For years a character had been rolling around in his mind and in 2008, the character became the Hunter and the series was born. They are stories of an aging man hunter and his protege’ in Arizona in the last half of the nineteenth century.

And, listen in every Thursday evening at 7 PM Pacific time for “The Writer’s Block” on www.latalkradio.com