Book #1 of the Timeless series, The Timeless, is now available on Kindle ($0.99), Kindle Unlimited (Free) and in print ($5.99) on Amazon. The series, created by Tuscany Bay Books author, Richard Paolinelli, and his grandson, Gibson Buffa, will be a six-book novella series.

In the far distant future, with the galaxy locked in an area of dark space where electronics will not work, Little John Singapore sits in a prison cell on Pluto awaiting execution. Singapore is the First Mate of the pirate ship, the Timeless. As he awaits his fate he agrees to tell a young author one story each day about his ship and his Captain, Rock Congo.

Singapore tells how the Governor of the Sol system Garabaldi enlisted the ship and her crew to pursue Duchess Moran. Moran is an infamous interstellar thief tired of her plans being interfered with by the Earth-led Alliance. She has stolen the Amulet of Geraint, allowing her to travel through time at will. Her target is ancient Greece, where she plans to prevent democracy from ever taking hold by stopping King Leonidas from reaching the famed Battle of Thermopylae. By changing Earth’s past she hopes to prevent the Alliance from ever forming.

The Timeless, a ship that can sail through space, air and water with equal ease, is the only ship capable of time travel, and Earth’s only hope to save its past, present and future. Despite being crewed by pirates, Garabaldi sends them through time in pursuit of Moran.

When the Timeless arrives in ancient Sparta, the find Moran has already been there and has kidnapped Leonidas and his Queen. Now they have just a matter of days to find her and the King to keep his appointment with King Xerxes of Persia and preserve Earth’s history.

The first book of the Timeless series, a middle grade/YA science fiction/steampunk hybrid, is sure to be a hit with readers of all ages. As well as fans of historical fiction as the Timeless and her crew will be very busy in Earth’s storied past in future books in the series.

Dr. Bruce Solheim will be at the $5 or less Bookstore in Simi Valley, California on Saturday, Sept. 22 from 10 a.m. – 2 p.m. signing copies of his non-fiction book, Timeless.

The store is located in the Sycamore Village shopping center at 2880-A Cochran Street
in Simi Valley, California.

Tuscany Bay Books/Black Dog Publishing was well represented on April 21-22, 2018 at the Santa Clarita (CA) Cowboy Festival. Here is a copy of Richard Paolinelli’s blog post (from his website blog at http://www.scifiscribe.com) on the two days he and Jim were there:

Sorry for the delay but this has been one of those weeks and I am now just catching up on things I should have done on Tuesday.

Angeles. It was my second straight year going as an author and setting up shop in the Buckaroo Bookshop. As with last year, sales were near non-existent for me and little better from what I could tell for the others. In fact, I bought as many books as I sold – one – and that one was a book on the civil war that caught my eye as I was talking to KNX reporter Bob Brill at his table.

But book sales really aren’t the reason for going. If you have a nice run – my partner at Tuscany Bay Books, Jim Christina, got Sunday started with a bang with three books sold to the first person that walked into the tent – that’s a bonus. The people you meet, the other authors and the vistors who stop by your table, are the real reason to go.

Last year I went for just the first day only and that Saturday someone decided to turn the broilers on over Southern California. It was hot and miserable. This year the weather cooperated over both days. It was still warm, more so on Sunday, but not nearly as bad as 2017.

As Black Dog Publishing / Tuscany Bay Books was the primary sponsor of the bookshop this year Jim and I headed over to the park to set up the tent on Friday. The shell of the

tent was already up and all we needed to do was help David Veal set up tables, chairs and the metal grates hanging behind the tables for authors to hang banners and other items off of.  We also had brought over our own books and other items to set up the next morning. Some of the others also showed up on Friday (after the heavy labor was finished of course). J.R. Sanders, Eric Heisner and Al Bringas I’d met last year. But Courtney Joyner was someone I hadn’t met before.

Joyner not only writes westerns, he also writes sci-fi/fantasy and his new book Nemo

Rising is on my to-read list. So he was definitely someone I wanted to meet, which I did on Friday. I was surprised he wasn’t going to be at DragonCon this year. It would have been funtouching base with him again in a sci-fi/fantasy setting. Maybe next year, Court.

Setting up on Saturday was a breeze and the rest of the authors arrived to set up. One of our one-day-only authors was Peter Sherayko. You might recall him as Texas Jack in the movie Tombstone. Peter set up his table and then hung out at our table for about 30 minutes.

It was the highlight of the day and would have been even without Peter signing a movie still from Tombstone for me. (Yes, it is hanging on my office wall.) Especially when Peter, working on a huge cigar, and another gentleman decked out as an Old West U.S. Marshal

smoking a cigarillo were chastised for smoking in a “non-smoking” area. One smoke was put out, the other was not. Since no one in the bookshop minded, the matter was quickly dropped.

The rest of the day passed as expected. Lots of folks came by. I sold a book. Civil War reenactors marched back and forth several times. A cosplayer portraying Lincoln passed by a couple of times. We kept telling him to skip the play. I don’t think he did. The cosplayer who last year had a magnificent hand-made Lone Ranger costume right off of Clayton Moore’s dressing room rack decided to do Zorro this year. He did that even better than the Lone Ranger.

Next door, Johnny Crawford, who played Chuck Connors’ son in The Rifleman, set up shop. Jim had met him when Jim was just 11 years old and went over to say hello again.

Sunday morning got off to a great start. Someone, no ratting out friends here, had procured tequila made from almonds in Mexico and we toasted the final day of the festival with a tequila shot. I’m not much of a drinker, certainly not at 9:30 in the morning on a Sunday, but that was some mighty smooth tequila.

Johnny Boggs, one of our authors, arrived in time for the libations and relayed an

adventure he had and he and Joyner had gone out to dinner the night before. After parting company, Boggs was on his way to his car when he was approached by a man in the parking lot.

Despite his many protestations to the contrary, Johnny could not convince the man he wasn’t Stephen F***-ing King and quickly retreated to his car and left. The only mistake Johnny made was telling the rest of us what had happened. Especially with Jim and I around.

Because while Johnny was engaged in conversation with a visitor to his table, I grabbed Sheryako’s name placard, flipped it over to the blank side and wrote: “I am NOT Stephen F***-ing King!!!!” on it while Jim rounded up a young man of about 12 and paid him $10 to walk up to Johnny’s table and ask him” Sir, are you, Stephen King?”

Bob Brill, like a champion newshound that he is, videoed the whole thing, including

Johnny’s good-natured reaction and me walking up to replace his name placard with the new sign. Johnny snapped a picture of it, left it up on the wall all day behind him and took it home with him. I have the video but for some reason, I can’t get it to post here. It’s a shame because it was amazing.

Jim sold three books to a woman visiting from San Diego County. I had stolen Bob Brill’s idea of having a drawing for a free signed book in exchange for people signing up for my newsletter. I got a dozen entries and as fate would have it, Al Bringas drew the winner that afternoon. It was the same woman who had bought Jim’s books.

In addition to being from San Diego, she told us she had been born and raised in Odessa, Texas. The same Odessa where I lived for over four years and got started as a freelance writer back in the 1980s. So when her name was drawn I couldn’t have been more pleased.

The rest of the day passed slowly, not too many people made it out to our section of the

park and it was finally time to pack up our belonging and break down the tent.

Like I said, sales-wise I don’t think you could call it a success. But people-wise? Hell yes, it was a smash hit. We got to hang out with some amazingly creative people, got to chat with some folks for the first time and just enjoyed the weekend. I’ve had much worse weekends, but fewer better.

So, the next big trip is Atlanta for Labor Day weekend and DragonCon. If you are planning on attending, I hope to see you there. And if you see me about, come on up and say hello. I’ll have copies of my new book, When The Gods Fell, with me. It is due to be released on September 4th but I’ll have a few on hand with me in case you want to get the jump on everyone else.

Escaping Infinity, the epic sci-fi novel written by Richard Paolinelli, was named as a finalist for the 2017 Dragon Awards Best Sci-Fi Novel on Thursday, August 3rd.

The awards are in their second year and are run by DragonCon, an annual event in Atlanta, Georgia that sees over 70,000 visitors, a number exceeded only by San Diego’s ComicCon. Voting has begun – and is open to anyone who wishes to participate – and runs through August 28th with the winners announced on September 3rd. Here is the complete list of finalists.

To register to vote – it is free of charge and you do not need to attend the Con to vote – click this link: Vote Registration

And a ballot will be e-mailed to you to fill out. You may only vote once.

Here’s what all of the shouting is about: 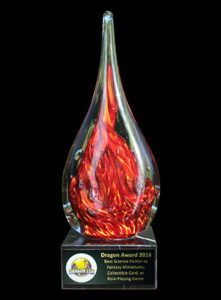 Escaping Infinity, our epic sci-fi/fantasy novel by Richard Paolinelli, was awarded second place in the 2017 Blue Ribbon Book Cover Contest on Saturday, July 15th. The annual award is handed out by the East Texas Writers Guild and books from the U.S., U.K., Canada and Australia were judged.

Please bear with us, the critter is proving a bit harder to corral than we anticipated. We’ll have him up ASAP.